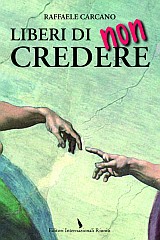 In uscita a settembre per Editori Internazionali Riuniti

1) Whales have hipbones and remnants of legs buried deep within their bodies. These structures are the remnants of functional hips and legs of ancient whale ancestors that lived on land before they returned to the sea. Fossil evidence is abundant.

2) Humans have canine teeth, the remnants of predatory weapons used to kill and tear the flesh of prey. Although canine teeth are still useful, they are no longer used as they once were.

3) Most humans have wisdom teeth. As the shape of the human face changed over many millennia, the upper and lower jaw reduced in size. Wisdom teeth, which were once a priority for grinding the heavy cellulose diet of our ancient ancestors, are currently being crowded out by the reduction in size of the mandible. They continue to be used for grinding cellulose but at a far diminished level.

4) Humans have an appendix that once was a larger functional digestive sack used to digest the high cellulose diet of human ancestors. The appendix retains some usefulness in children as a storage place for digestive bacteria and immune cells, but no longer functions as a digestive organ.

5) Some snakes, like whales, have vestigial hipbones and legs, remnants of useful structures found in their quadruped ancestors.

6) Blind cave fish and deep-sea residents have vestigial eyes under a layer of skin and scales. The complete darkness of their habitats made normal eyes useless and a survival disadvantage.

8) Humans have vestigial skin muscles that cause goose bumps and stand hair erect, a carryover from the time human ancestors had full body hair.

9) Flightless birds, such as penguins and ostriches, have vestigial flight wings. Their wings are currently used for swimming and balance while running but are vestigial for flying.

11) Humans have a vestigial eyelid, the tiny plica semilunaris, which has reduced in size and is located at the medial corner of the eye.

12) Humans have vestigial genes that once enabled us to manufacture Vitamin C. Humans and guinea pigs no longer have that ability and must ingest Vitamin C to prevent scurvy.

13) Thousands of beetle species have vestigial, nonfunctional wings hidden under a hard shell. The ancestors of those beetles could fly at one time.