In recent days, the manifestos of the no-choice fundamentalists against pharmacological abortion have aroused righteous scandal and indignation, after comparing the Ru486 pill to a poison and the woman taking it to a both suicidal and homicidal Snow White.

Indignation that for once not only shocked civil society but also the very administrations of the cities in which the posters appeared. Milan, Rome, Trento in order of appearance have in fact promptly withdrawn and unsubscribed communication considered seriously damaging to the right to self-determination of women, sanctioned by law 194 since 1978.

Not Genoa: the city of the lantern in fact, first with a note then with a formal vote in the city council, took the exact opposite position and defended the no-choice propaganda, no questions asked.

“The art. 21 of the Italian Constitution protects the right to freedom of expression of thought as ‘the cornerstone of democratic order and the bedrock of democratic law, co-essential to the regime of freedom guaranteed by the Constitution’ (as the Constitutional Court has expressed in various rulings ). Political censorship is an institution banned by our legal system and the duty of the Administration is to face the different expressions of thought with transparency and absolute impartiality”, reads the official press release of the Ligurian capital.

Now, without getting into the boring but fundamental disquisitions on the constitutional case of peddling news that is scientifically false and in turn harmful to the fundamental rights of others, this brings back memories of a column in the satirical newspaper Cuore which claimed that politicians were two-faced, the second face looking more like their ass.

UAAR knows this double-standard far too well, since it has been censored by the municipality of Genoa and with such obstinacy that after a first victory in the Regional Administrative Court and a partial loss in the State Council, the association has made an appeal to the European Court of Human rights. 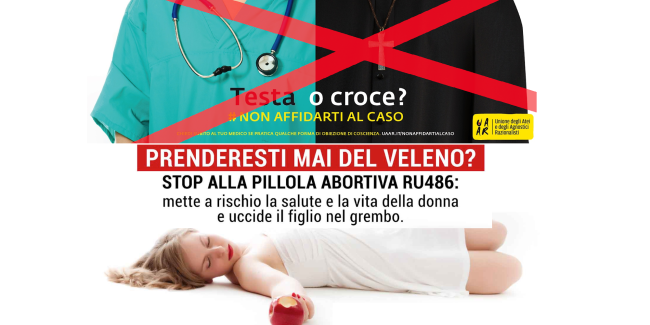 And coincidentally, but maybe we’re just being suspicious, the advertising campaign that covered all over Italy, except for Genoa, was Don’t rely on chance, which invited you to inquire about whether or not your doctor had adhered to the conscientious objection. The campaign was evidently so subversive that it was also published in notoriously extremist and dangerous newspapers such as Oggi and IoDonna…

In our opinion there was nothing in that campaign which would fit the criteria the municipality of Genoa now states would be grounds for censorship, namely “the message clearly contains aggressive, vulgar formulations and incites hatred and violence, or is detrimental to people’s honor and reputation “. Interesting how all other cities perceived that very violence in the billboards against the use of RU486 billboards and had them promptly removed.

But apparently our invitation to inquire is more dangerous for Genoa than an offense to science and rights. In Genoa the right of atheists and agnostics to express themselves, moreover calmly, counts less, or does not count at all, than that of misleading fundamentalists. For rationalists, atheists and agnostics Article 21 of the Constitution does not apply when you have a double standard for censorship.